From the website of SKOR/Foundation of Art and Public Domain: 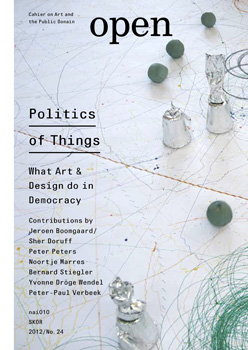 In 2005, in the book and the exhibition Making Things Public: Atmospheres of Democracy (see here), Bruno Latour and Peter Weibel asked themselves how democratic politics could function better and what the role of things, objects, issues and art might be within that.  Open24 investigates the current state of affairs in the theory and practice of the ‘Politics of Things’. What does a thing like ‘art’ do in democracy, how does art make publics, how does a thing interact with other things and people, and how does it influence them?

Jeroen Boomgaard shows how the politics of things offers purchase for actual practice, while Sher Doruff urges more abstract and philosophical reflections. Peter-Paul Verbeek demonstrates how art can examine the political role of things. Noortje Marres uses the example of the teapot to analyse the political role of technology, things and issues. Bernard Stiegler philosophizes on the technical condition under hyper-capitalism. His essay is introduced by Pieter Lemmens. Pascal Gielen proposes that the ‘Art Thing’ can encourage a democratic autonomy. Peter Peters and Ruth Benschop reconsider the public work of art Tilted Arc by Richard Serra. Fiona Candlin investigates the public significance of the Vintage Wireless Museum in London. Mariska van den Berg examines how the relation between citizens and the government can be reinterpreted by art. Plus, a visual contribution by Yvonne Dröge Wendel and her Object Research Lab, with a dialogue by Sher Doruff and Maartje Hoogsteyns.

Just recently – over at Larval Subjects – Levi Bryant discussed the question whether there is a politics of object-oriented ontology. END_OF_DOCUMENT_TOKEN_TO_BE_REPLACED

While reading Adorno & Horkheimer’s Dialectic of Enlightenment I was struck not merely by the complexity of their argument, but by the fact that their analysis of the achievements of Enlightenment shows so many (indirect) affiliations with recent developments in Speculative Realist or Object-Oriented ontologies. END_OF_DOCUMENT_TOKEN_TO_BE_REPLACED

Two recent books seem to be of particular importance to conceptualize the role of objects, things, non-humans and/or materiality anew for/in political theory; Jane Bennet’s Vibrant Matter and Bruce Braun’s and Sarah Whatmore’s Political Matter. Both books consist of profound articulations of the consequences of a new, symmetrical ontology for traditional, modern concepts of politics. That is, they both draw upon the idea that every historical constitution of political community has been grounded upon the exclusion of non-humans, i.e. upon the rigid distinction between a human world of speech, deliberation and contemplation and a non-human world of inert, fully causal and dead matter. When, however, the very character of non-humans is changed in ontological terms, then questions such as what the conditions for political agency are, how a society and political community inaugurates itself are re-opened. Mainly by drawing upon the recent object-oriented turn in ontology (writers such as Graham Harman and Quentin Meillassoux) a new political  agenda could be opened.